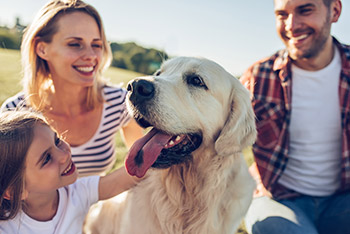 Be proactive toward your canine’s health with a thorough examination at our animal hospital. All new animals should be examined soon after acquisition and annually thereafter. Emerson Animal Hospital P.A. also offers vaccinations for the following:

Distemper (DHLPP—Six-in-One)
The distemper six-in-one vaccination protects against major life-threatening diseases, including distemper, hepatitis, leptospirosis, Para-influenza, Adenovirus 2, and parvo. Leptospirosis is a bacterial disease that can be transmitted to humans.

Rabies
Rabies is a fatal nervous system virus that can be transmitted to all mammals (including humans) through an animal bite. The law requires that this vaccination be given between three and six months of age before a license is issued.

Corona
Corona is a virus that causes severe bloody diarrhea. It is similar to panto.

Bordetella
Bordetella is an infectious organism that causes a severe cough and upper respiratory infection. It affects both puppies and adult dogs.

Lyme
Lyme is a bacterial disease spread by ticks. It affects both humans and animals. In dogs, the bacteria may localize in the joints causing serious inflammation and limping or may invade the kidneys causing renal failure.

Fecal Tests
Emerson Animal Hospital P.A. performs fecal tests to determine whether or not internal parasites (worms) are present. Many puppies are born with them and adult dogs acquire them. They are infrequently seen in the stool.

Heartworm Test
Testing for heartworm should be done yearly to rule out heartworm disease which is transmitted by mosquitoes. The adult worms live in the heart of your pet and can cause severe problems to the valves of the heart and heart muscle itself. Heartworm disease is easily prevented by once-a-month oral medications such as HEARTGARD or SENTINEL.